National Holocaust Day, Yom Hashoah, is commemorated in Israel on  27th of Nissan, which this year is on the April 16th.

The post below was one of the most frequently read post on my previous blog and so I am reproducing it here for those who never had a chance to read this incredible  Holocaust story.

Monday, April 12, 2010
A HOLOCAUST STORY – The Hidden Synagogue of Theresienstadt

The painted roof of the hidden synagogue

Many stories about the Holocaust are still coming to light and one I heard today, from Mrs Helen Gross, one of the participants in the story, was too amazing for me not to repeat. Only in recent years have most of the facts of the story become known – although there are inevitably still unanswered questions, which may remain forever unanswered.

Helen Gross’ uncle, Asher Berlinger, a very religious man was also a talented artist, craftsman and musician. He was a Chazan in Schweinfurt, Germany, before the Holocaust.
After Kristallnacht Asher and his wife , fearing for their children’s lives, sent their two daughters on the kinder transport to England . He and his wife were deported to Theresienstadt Ghetto in 1942. Asher continued to teach Torah whilst in the ghetto and he wrote a series of ‘luchot’, calendars, to make sure that everyone knew when the Chagim( Jewish festivals) were, when Shabbat started each week, the week’s parsha and the dates and times of Rosh Chodesh.

Eventually he and his wife suffered the same fate as 88,000 of their brethren and were transported to Auschwitz and murdered. Several of his luchot were discovered and donated to Yad Vashem . On the back of some was a self-portrait that he had drawn, showing him praying in a shul (synagogue) which was assumed to be his old shul from before the war.

After the war, the homes in Theresienstadt were returned to their former Czech owners. A Catholic undertaker went back to his home with his family and many years later in 1997, whilst starting renovations in the kitchen he began to break down a wall . He suddenly realized that what he was revealing was a highly decorated area behind the wall. Being religious he also recognized the Hebrew writing. His priest advised him to leave the room alone to avoid the curse of the Jewish people.
He kept the discovery a secret from the authorities. Occasionally he showed to room to Jewish visitors who came to see the site of the ghetto.

The two Berlinger daughters, meanwhile, grew up as orphans and married, one in England and one in America. A few years ago, Senta, who lived in England, passed away and her sister Rosie came from the USA to bury her sister and sit shiva for her in her house. One of the visitors to the shiva brought with her photos from her recent visit to the Holocaust sites of Europe and Rosie politely glanced at them ……… and there amongst them were photos of the hidden shul in Theresienstadt , which Rosie immediately recognized as the background to her father’s self-portrait on his ‘luchot”.

Straight after the shiva she flew to Europe to see for herself and knew that she was standing in a shul that her father had designed and decorated. But how could she prove it. The portrait at Yad Vashem connected him to the shul but not necessarily as its designer.
But Asher Berlinger wrote in a unique form of calligraphy which he taught to his brother-in-law who in turn taught it to his daughter, Helen Gross. She was able to reproduce the entire alphabet in the style the pesukim in the shul are written.. 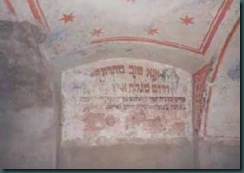 Asher Berlinger’s handiwork and undying faith, as portrayed in the beauty of the shul and the pesukim he chose, were officially acknowledged by the authorities and in 2006 the family were invited to a rededication of the shul in the presence of top officials and dignitaries from the Czech Republic, the USA, and Israel.

As Helen Gross explained when telling the story, it is still not known who used this shul and when, as so far no survivors have been found who actually knew of its existence , but who knows….
With so much ‘hashgacha pratis’ Divine providence, involved in the discovery of the shul and its origins, it’s not too much to expect that someone be found , who actually used the shul, as place of payer and comfort, during those terrible years.